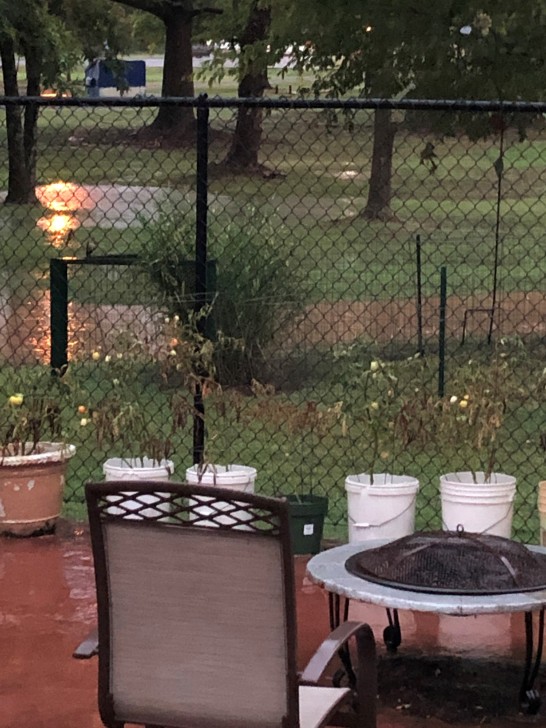 Last night we had a storm that brought flooding to our yard.  When I checked the totals, we only got a little more than a half an inch, but it all came in a 20-minute period.  The result was the ditch behind our house was overflowing into the neighbor’s yard and the low area in our front yard had a stream of running water flowing toward the drains.  We have had some big rains, but this was he most intense since we moved here.  Our gardener friend said her yard was looking the same with water flowing, although it did not impact her vegetable beds.

Several months after becoming the director of a conference center in Kansas we got what was described as a 500-year flood.  I checked on the rising water several times during the downpour.  The water submerged the road and cut the camp off from the nearby town.  Luckily, our house was on a raised section of land as everything around us was under water.  I had checked on the conference center at 11:00 pm the night before and then went in early the next morning.  The water had subsided, so I felt safe.  As I unlocked the door, I saw small pools of water on the tile.  When I stepped on the carpet, I felt the squish.  The water had risen to about two inches inside the building (from marks on the walls) and then quickly dissipated.  What a way to start.

While the rain falling in the area does raise the water level of the Arkansas River, its impact is felt downstream and not her.  The problem we had last year is the large amount of rain that fell in the Wichita to Tulsa area.  This was too great for the land to absorb and ran off into the creeks and streams, which all deposited into the river.  This quickly filled the reservoirs and forced the Corps to release the excess into the already swollen river.  The Arkansas River rose to a record 40.79 feet and flowed at an estimated 570,000 feet per second at the Van Buren gauge.  The river at its height affected hundreds of homes and thousands of residents in the region and cost Arkansas and Oklahoma millions of dollars in economic impact.

THOUGHTS:  When I heard 500 hundred-year flood I assumed that meant it would only happen once every 500 years.  I was wrong.  The phrase means it is predicted to occur once during a 500-year period.  Rain patterns come in cycles.  You tend to have a series of wet years followed by a corresponding series of dry years.  If you put enough dry years together you have a drought.  In contrast, flooding can take one bad storm.  The pandemic has hit the world like one bad storm.  Fauci (et al.) got us through the Ebola scare by acting quickly to contain the virus at its origin.  America’s refusal to acknowledge covid-19 as a threat has had the opposite effect.  With schools set to reopen this month we can only wonder.  Change is coming and it starts with you.