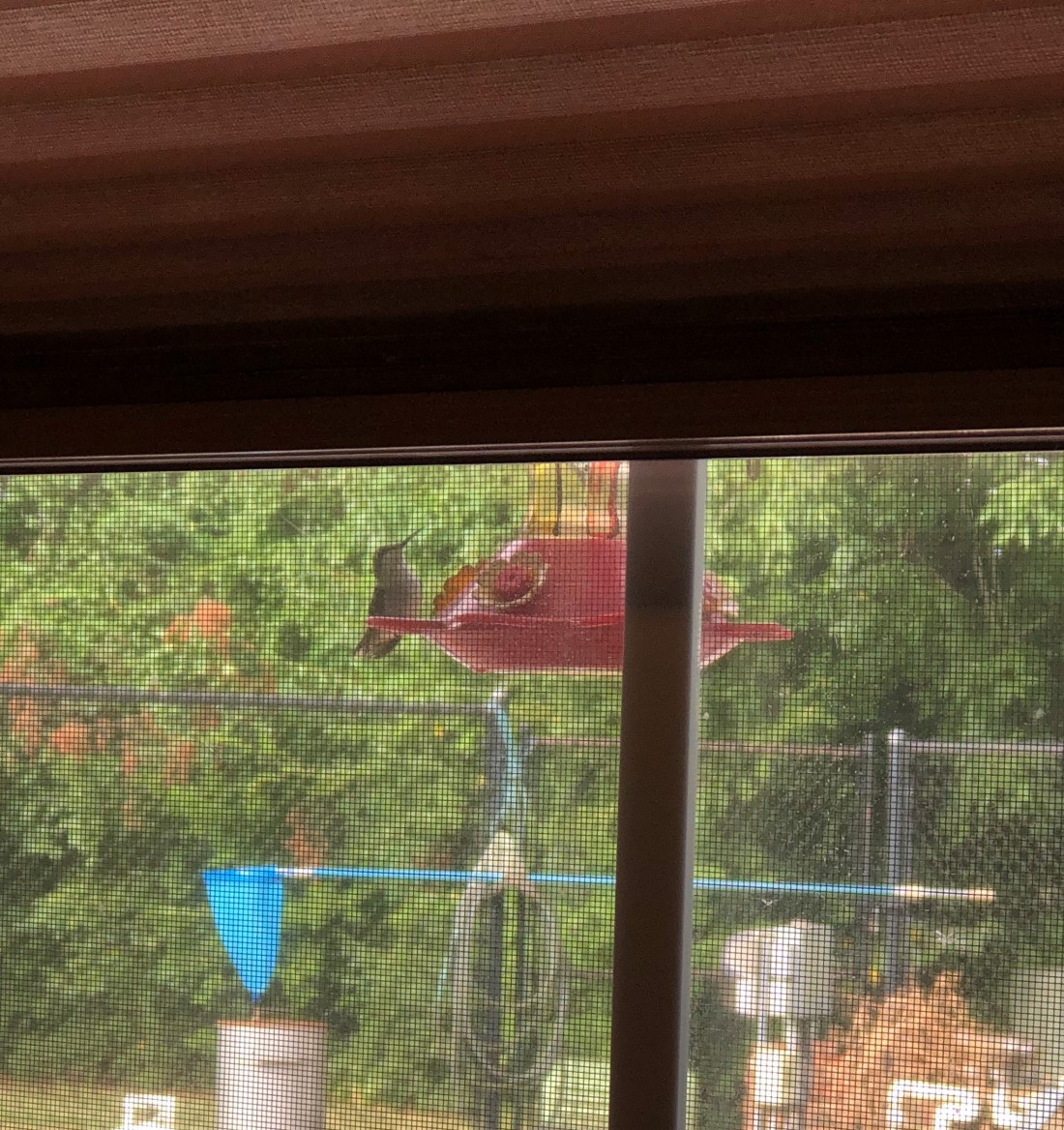 Melissa has been seeing the hummingbirds at our feeders all summer long.  I sit next to our Bay window where the feeders are located almost every morning and have only seen them on three or four days.  I also struggled with the identification.  All I ever saw was a drab little brown bird that did not show up on any of my identification platforms.  I have taken several pictures of these drab birds, but my identifiers do not even put them in the hummingbird class.  This has been driving me crazy all summer.

When Alex learned I was trying to be a birder this summer, he sent me a thoughtful gift for Father’s Day.  Actually, he sent two gifts.  The first was a lens I could attached to my phone.   The lens could be used for extreme closeups, but also as a 15x power telephoto.  I have taken it out to the field looking for birds, but around the house I am not fast enough to get it on the camera and take a shot of the bird before they are gone.  The second was a field guide to birds in North America.  This will be useful as I expand my birder territory.

The other day on Amazon I ran across another field guide for birds, but this was exclusive to the birds of Arkansas.  It was inexpensive, so I decided to buy it.  When the little brown hummingbird came back, I was able to get a picture.  I looked up hummingbirds in the Arkansas field guide and found a picture of my little brown bird.  It was a Ruby-Throated Hummingbird.  The reason I had not been able to identify it was because it did not have a ruby throat.  It turns out that is only a trait of the males.  The females are drab little brown birds.

THOUGHTS:  I have found it interesting how the male of most species are colorful while the female is innocuous.  I learned from my zoology class in college this disparity was used to attract attention.  The proud displays attract the interest of the females, but also predators.  That keeps them away from the mom sitting on a nest.  Humans have taken the opposite approach, at least over the last centuries.  The females wear the bright plumage in hope of attracting a male who might be a strong provider.  The flash for the males has shifted to possessions and wallets, but this still seems to attract predators.  Amid the changes we now face, perhaps we should all look beyond the flash to what is inside.  Change is coming and it starts with you.